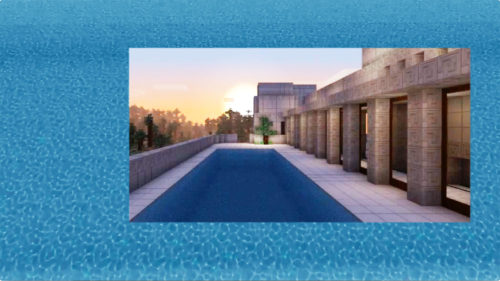 Ennis House is a project about the various representations of one of the most used film locations in the world, Frank Lloyd Wright’s Ennis House in Los Angeles. The video combines found footage from over 20 movies, commercials, games and 3d renderings, which have been filmed in the building or based on it’s interiors since the 1930’s. Dialogues are removed and narratives deconstructed to focus on representations of the building and it’s fictional inhabitants, who can be seen moving through corridors, swimming across the pool or simply occupying the space. Some of the original sounds clips are used to synchronise clips from various sources – but only to suddenly disrupt suspense of disbelief and hence negotiate the relationship between actual space, film footage and sound.

The Ennis House was designed by Frank Lloyd Wright for Charles and Mabel Ennis’ Los Angeles residence in 1923. It is one of the most used film locations in the world and one of the most important examples of Mayan Revival Architecture.
https://en.wikipedia.org/wiki/Ennis_House